She took COMPANION on a walk to share a quick tour of the architectural history of her adopted home. Zara knows a thing or two about architecture — she completed a bachelor’s degree in the subject at Vienna’s technical university, followed by a master’s at the Academy of Fine Arts. Today, she works as an artist and freelance photographer. Zara explains what makes Vienna such a great place to live in using the vivid example of the Alt-Erlaa housing estate, which she recently immortalised in her photography book ‘Du, meine konkrete Utopie’ (You, My Concrete Utopia). Though located a little out of the centre, its residents are quintessential Viennese locals — pragmatic with a well-developed sense of community. Surveys have confirmed this observation: Vienna’s social-housing policy has made a demonstrable contribution to increasing resident satisfaction. Zara realises something else during our walk through the city centre: many Viennese buildings were ahead of their time. Even indulgent world weariness has a place here, as does time-worn traditions and the current zeitgeist. The locals have a term for that: mélange. 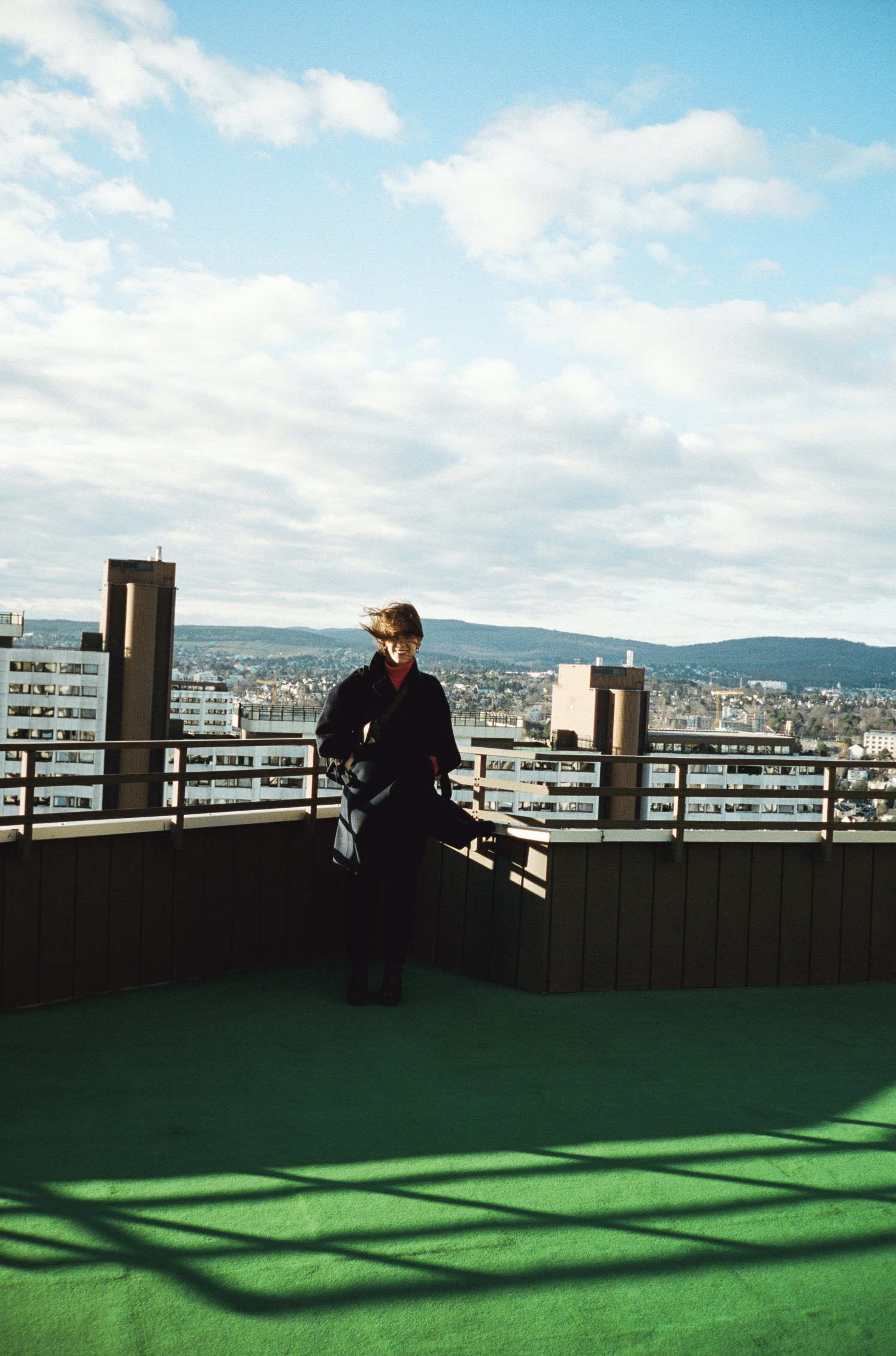 Our tour kicks off with a Viennese classic that has well earned its title and is one of the most beautiful art nouveau buildings in Vienna, within walking distance of Zara’s alma mater. The impressive entranceway bears the inscription ‘Der Zeit ihre Kunst, der Kunst ihre Freiheit’ (To every age its art, to every art its freedom). The Secession Building was built in 1898 by Joseph Maria Olbrich as a venue for exhibitions and collections for the up-and-coming bohemian art scene centred around Gustav Klimt. The population at the time was disappointed by how new and out of place the building looked compared to those surrounding it. Today, the Secession hosts rotating exhibitions showcasing the work of international artists. One special feature is the view from the cupola, which is not usually accessible to visitors. It was renovated only recently, a process during which some of the gold leaf went missing. ‘Went missing’, or ‘was stolen’, as others would say. ‘Gfladert’ as Viennese would say. 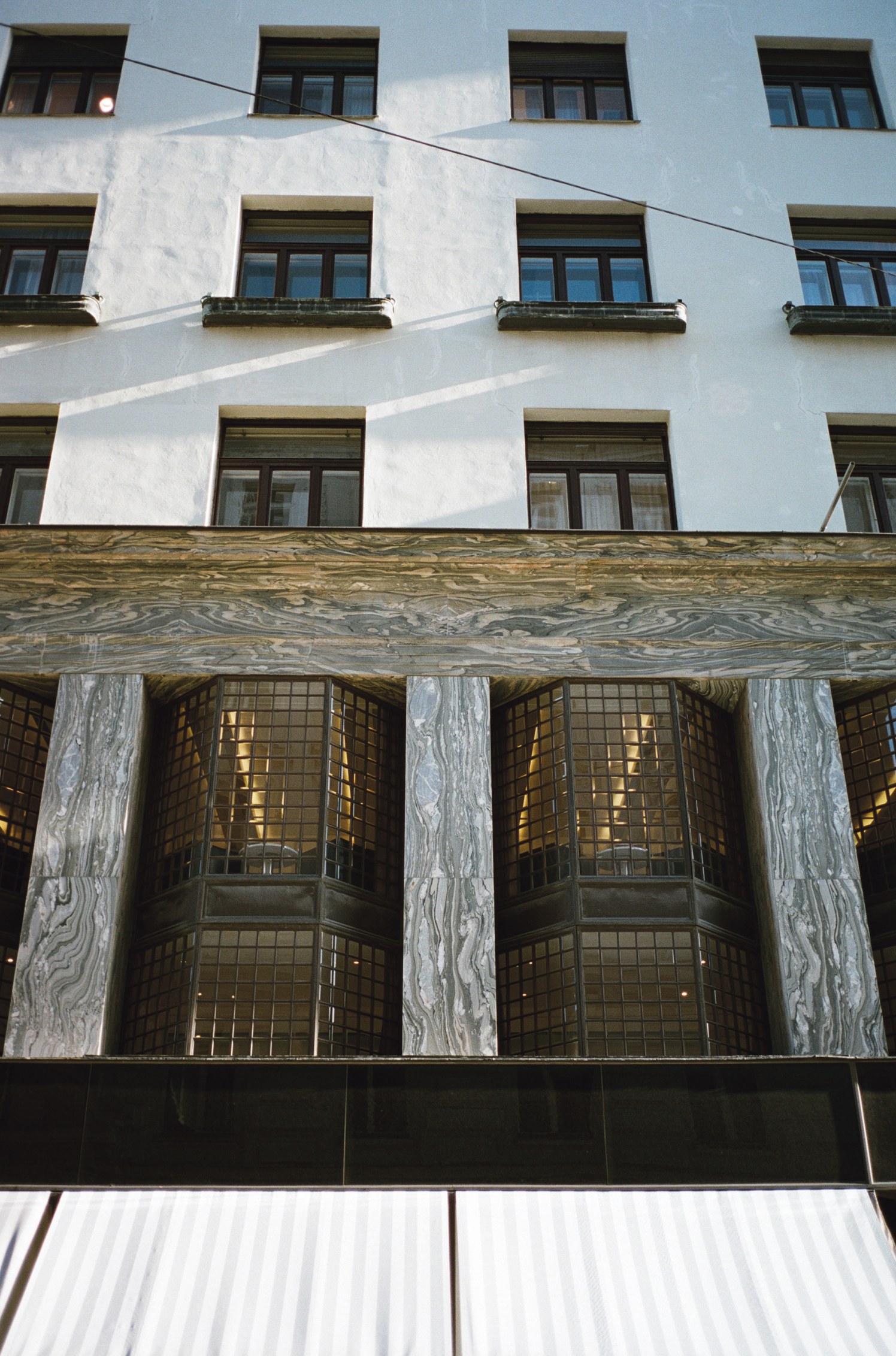 On the Trail of Adolf Loos

Adolf Loos is a cult figure in Vienna. ‘Ornament and Crime’ was his most famous book, and its title says it all. The art nouveau movement was despised by the architect, despite the fact that he was of its time. In Vienna, he designed several buildings, including a cosy bar which is named in his honour. Despite its tiny 27-square-metre size, Loos Bar’s mirrored walls give the impression that it is much larger. In times gone by, the toilets in the basement had a corridor leading straight into a brothel. To this day, the cocktails are still well stirred, including the signature drink, a champagne spritzer. A mere few metres away, you can find the Looshaus, which is one of the most important architectural works of the Viennese Modern Age and today houses a bank. Apart from some flowers, its facade is completely without decorative elements — an architectural choice which was seen as a declaration of war against the convention of historicism at the time. Its lack of dripstones above the windows earned it the name ‘the house without eyebrows’. It’s said that Kaiser Franz Joseph ordered certain windows at Hofburg to be boarded up to spare him the sight of the eyesore.

No website, no email address, not even a phone number. This café, located in the first district, knows that visitors will find it anyway. That’s due to its sandwiches, for example, which are served even past midnight, when the tourists make room for the odd regular. Architect Hermann Czech was responsible for the café’s interior furnishings. The ‘toilets that have become necessary’ weren’t added until 15 years later, in the mid-1980s. To this day, you can see the less exposed side of the local coffeehouse culture, with people sitting around for hours reading magazines and leading discussions fuelled by the house wine. People smoke in here too, of course. Is it true that the tiles were originally grave slabs? ‘Could be,’ says the waiter. You could ask the boss, who comes into the café for half an hour each lunchtime. In person, of course.

What’s black on the outside, as colourful as a butterfly on the inside, and looks totally out of place in the untidy setting of the first district? That would be the concept store Indie. Built in the 1970s by Austrian industrial designer Carl Auböck, it originally served as a printing shop. Vienna gained another scandalous building. To this day, some of the metal furniture designed by Auböck is still found in the shop, and mirrors are known to have been nicked right off the walls. All this was told to us by managing director Harri Cherkoori, whose excellent Viennese humour is somehow also conceptual. The same goes for the complex story of butterfly catcher Eugène Le Moult, whose extensive collection of pyjamas inspired the store to carry sleepwear from the label Praline Le Moult. Apart from that, Indie also sells Novesta trainers, Royalties socks, clothing from the Viennese label Rudolf, bags made from recycled plastic by Facteur Céleste, miniature rocking horses, scented candles, and some things that are pretty and serve no purpose whatsoever. And butterflies.

After browsing, we carry on our tour — with some more architecture, of course. And art. ‘As a freelance artist, you are quite privileged in Vienna,’ says curator Laura Amann, referencing the relatively large amount of support available. Together with her partner Jen Kratochvil, she has been running the Significant Other gallery for the past year and a half. Their exhibitions, she explains, focus on architecture from an artistic perspective, adding that ‘in doing so, we want to circumvent the conventional hierarchies’. For Jasmina Cibic’s ‘Everything We Do Today Will Look Heroic in the Future’, the duo set up an exhibition space that reached right up to the street and was covered over and over again with drawings of an insect with the unsettling name ‘Hitlerkäfer’ (Hitler bug). Moving to Vienna was a conscious decision for Laura and Jen  — taken on one hand for the freedom afforded by its low cost of living, and for its up-and-coming arts scene on the other. Then there’s the fact that people know each other here — always a plus.

Art galleries, third-wave coffee shops, boutiques for baby clothes: there’s nowhere in Vienna that resembles Berlin more closely than the hip seventh district — above all because this is where Zara’s favourite Turkish restaurant is located, which, as our next destination, is a welcome change of scenery. Because food makes you happy, of course. As a regular at the restaurant, she is greeted warmly by the staff. She orders the ‘Berlin Breakfast’ with olives, a fried egg (over easy, just for her), sigara böreği, sheep’s cheese, and honey. The ayran is homemade, so you can forget about the alternatives like Berliner Weisse beer. We enjoy a Turkish tea at the end of the meal, on the house, of course. Why does this venue bear the intriguing but confusing name Berliner Restaurant? That’s because the owner also operates Berliner Döner just next door, which is one of the best kebab shops in the city. 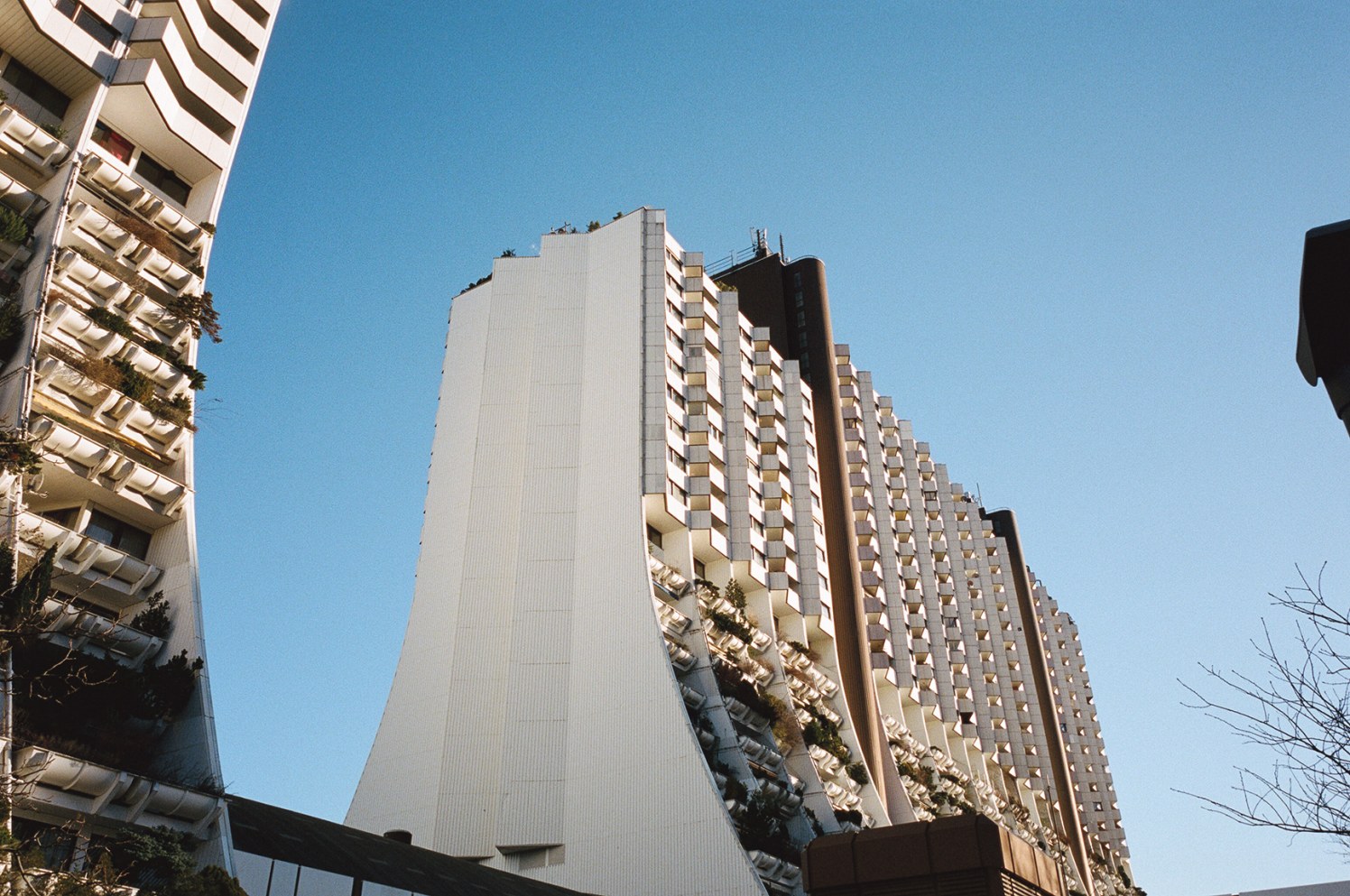 We take the underground train to get to our last stop: Alt-Erlaa. Harry Glück received harsh criticism for this satellite town, which was built between 1973 and 1985. People thought the alleyways were too dark, the common rooms too soulless due to a lack of windows, and the housing blocks and resident demographic too homogeneous. Yet, contrary to all expectations, Alt-Erlaa has since emerged as a flagship project. Zara gushes over the ‘Wohnpark TV’, the on-premise bridge club, and the Freddy Quinn Museum, as well as over the residents who traipse up to the rooftop pool in their slippers, noting, ‘We’re all the same in swimming costumes.’ Indeed, Vienna’s social democratic-housing policy, with lots of shared structures and residential estates like Alt-Erlaa, has made a decisive contribution to its residents’ quality of life. The price per square metre for accommodation here is far below the average for a big city. You can apply for one of the 3,200 rental properties. On average, it takes three years to receive your first offer. For Zara, who once lived at Alt-Erlaa for several weeks, this is an opportunity she is seriously considering. Because there is one thing you’ll find here for certain: happiness. 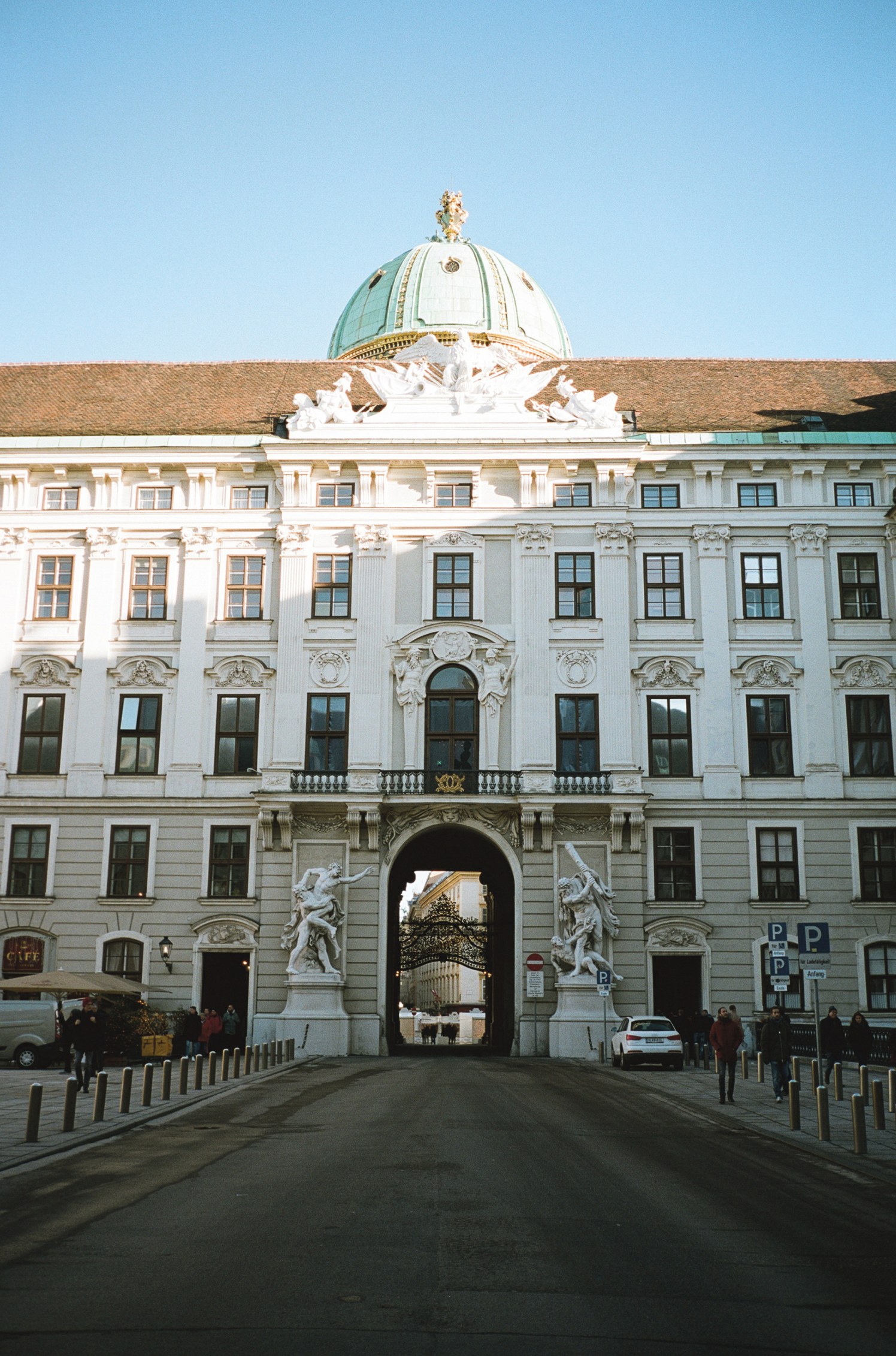