At the time, Dasitu was organising an evening of Ethiopian Oromo culture, and Michael had just returned from a long trip to Africa and was enthusiastic about the music. Later, he also managed to convince Dasitu to become his accomplice in professional matters as well. Dasitu was already working in the intercultural field anyway, and she thought combining that with musical culture would be the perfect match. ‘I was only able to really spark her interest in West African music culture as time went on, though,’ says Michael, laughing.

A year later, they founded Afroton, a wholesale music shop selling West African and world instruments. On top of that, their team also offers workshops, arranges occasional concerts, and they are part of a multiday event each year: the Africa Alive film festival. In doing so, they are making an important contribution to cultural understanding. ‘In Frankfurt, there are several different large African communities,’ explains Dasitu. ‘However, apart from a few exceptions, their lives follow separate paths.’ With the festival and various other projects, the couple is also striving to promote pan-African and international concepts and initiatives in Frankfurt. Through this work, Dasitu was able to not only discover her new German home but also to strengthen her relationship to Ethiopia — her family’s homeland, which she couldn’t visit in the years of the civil war between 1974 and 1991. ‘People are very interested to experience the sounds of different cultures together with all the locals from Frankfurt,’ says Dasitu. 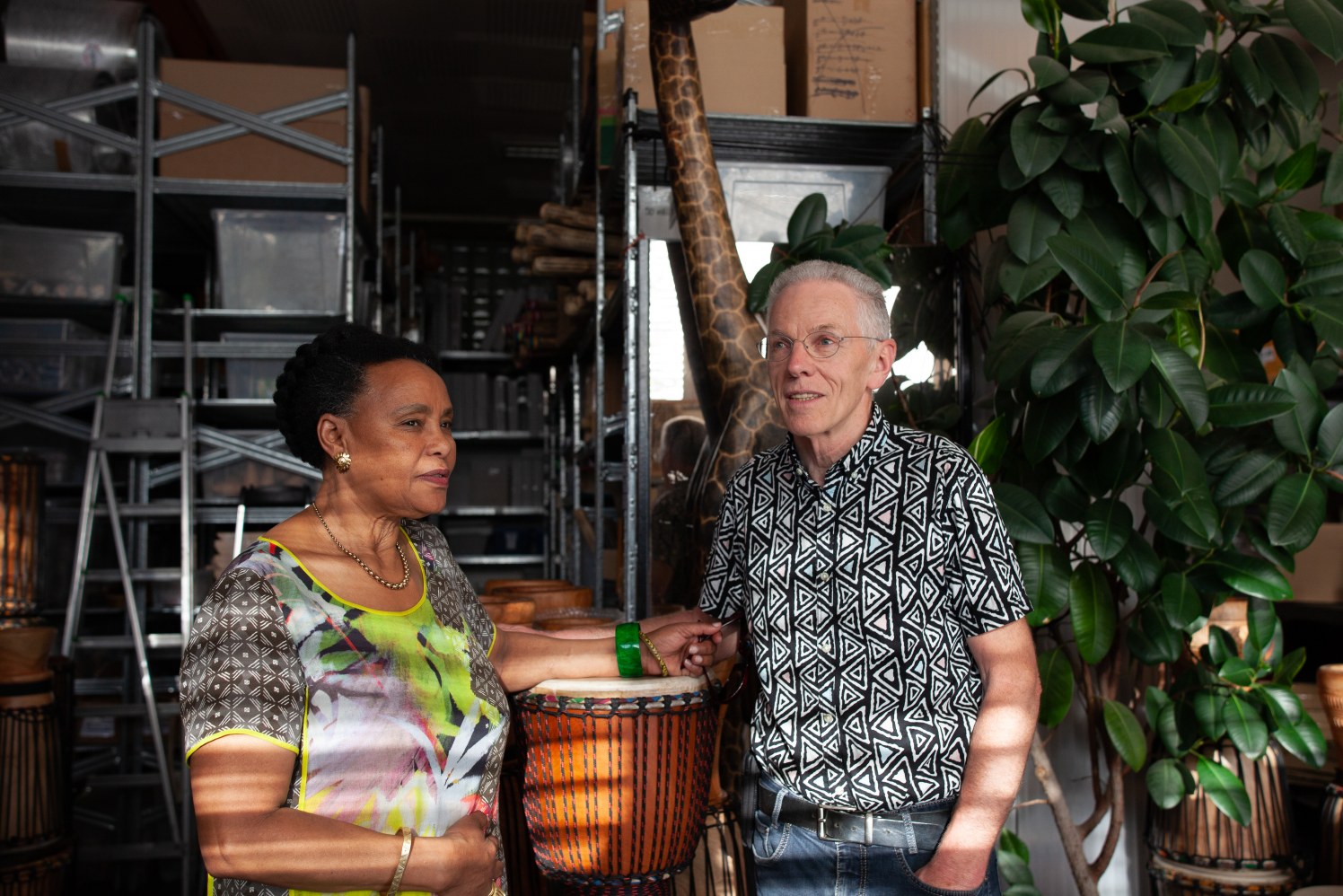 This was very fitting in a time when the number of intercultural couples and families was increasing — people just like Dasitu and Michael. ‘Many of the children had never visited their African parent’s home country. For these young generations especially, we are able to show something about the diversity of these cultures through music,’ says Michael, who has visited Dasitu’s home country of Ethiopia with their little ones in tow. Of course, the pair are going to keep their eye on the task for their district tour with COMPANION. They take us to locations in Frankfurt where you can experience Africa and its many different countries and cultures. In keeping with the familial nature of the story, they are accompanied by their daughter, photographer Maya Röttger.

The family-run business of Dasitu, Michael and Ibsa Gidada, Dasitu’s son, is a small melting pot of cultures. In the store rooms and retail space of their business, Afroton, you can find djembes, the traditional drum of West Africa, stacked together alongside singing bowls and balafons, small maracas, and larger percussion instruments: ‘Instruments of the World’, as promised by the business’s slogan. The showroom is open to the public, and large drums and small chimes, ornately decorated didgeridoos, and modern handpans can be bought by private buyers, from professional musicians and music therapists to laypersons. Mostly, though, Afroton sells to music shops and via online stores in Germany and Europe. 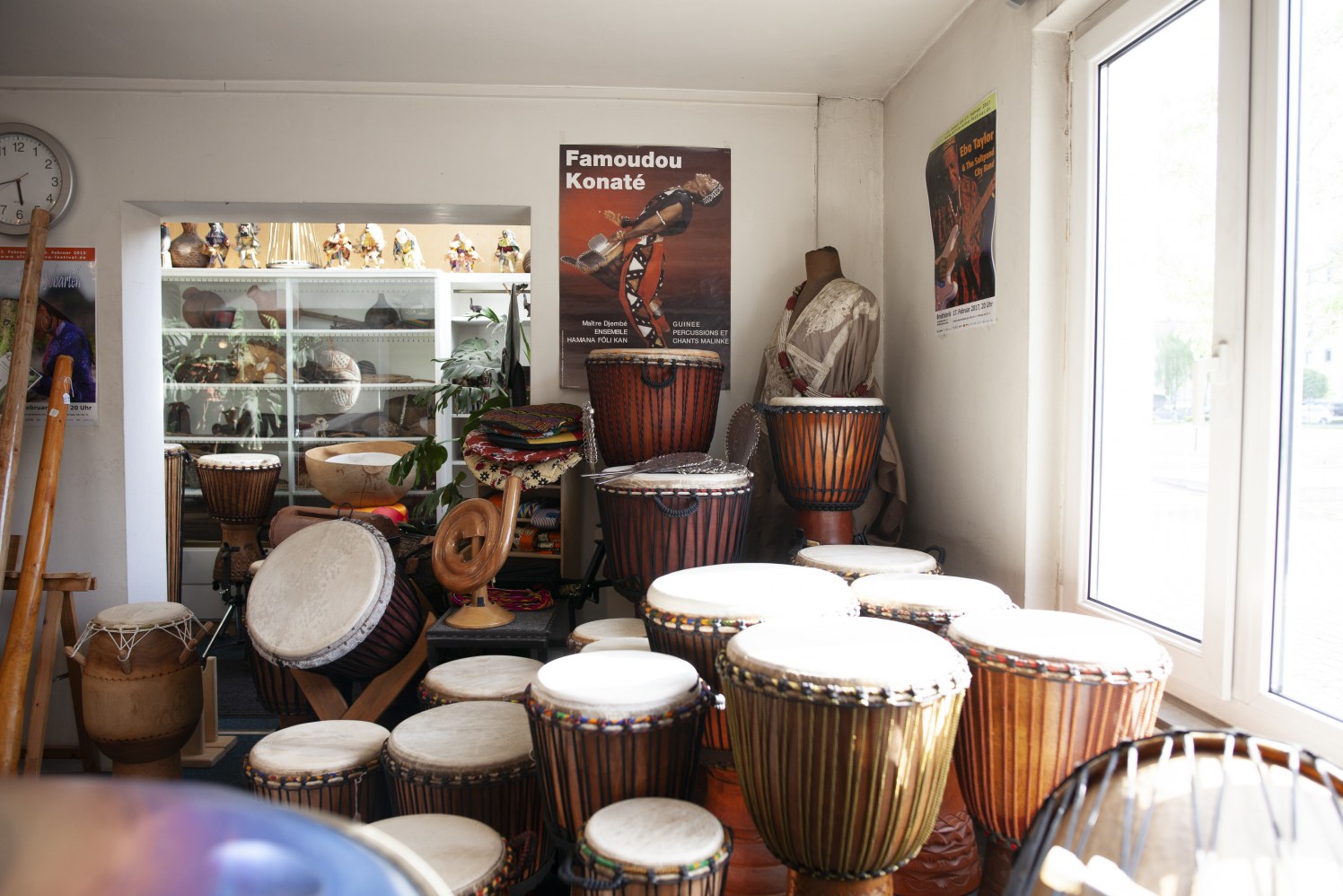 The team is just as diverse as the product range. ‘We have had people from very different cultures and religions working together for decades now,’ says Michael. ‘We always try to show tolerance to one another and pull together to move Afroton forward.’ A larger space also serves as a concert venue for around 100 guests — with the right culinary offerings, of course.

‘If we have a special occasion, we often go back to Almaz Yohannes,’ says Dasitu. And that’s not only because the owner of African Queen serves her guests excellent, authentic Eritrean food, and neither is it just because she sometimes manages to conjure up an elaborate buffet for Afroton events. Mainly it’s for the reason that she always garnishes her dishes — such as Fit-Fit, a vegetarian stew made from light Injera bread and a tomato sauce with authentic Eritrean butter, and Tzebhi-Begie, strips of mutton in a spicy sauce — with a good portion of love. 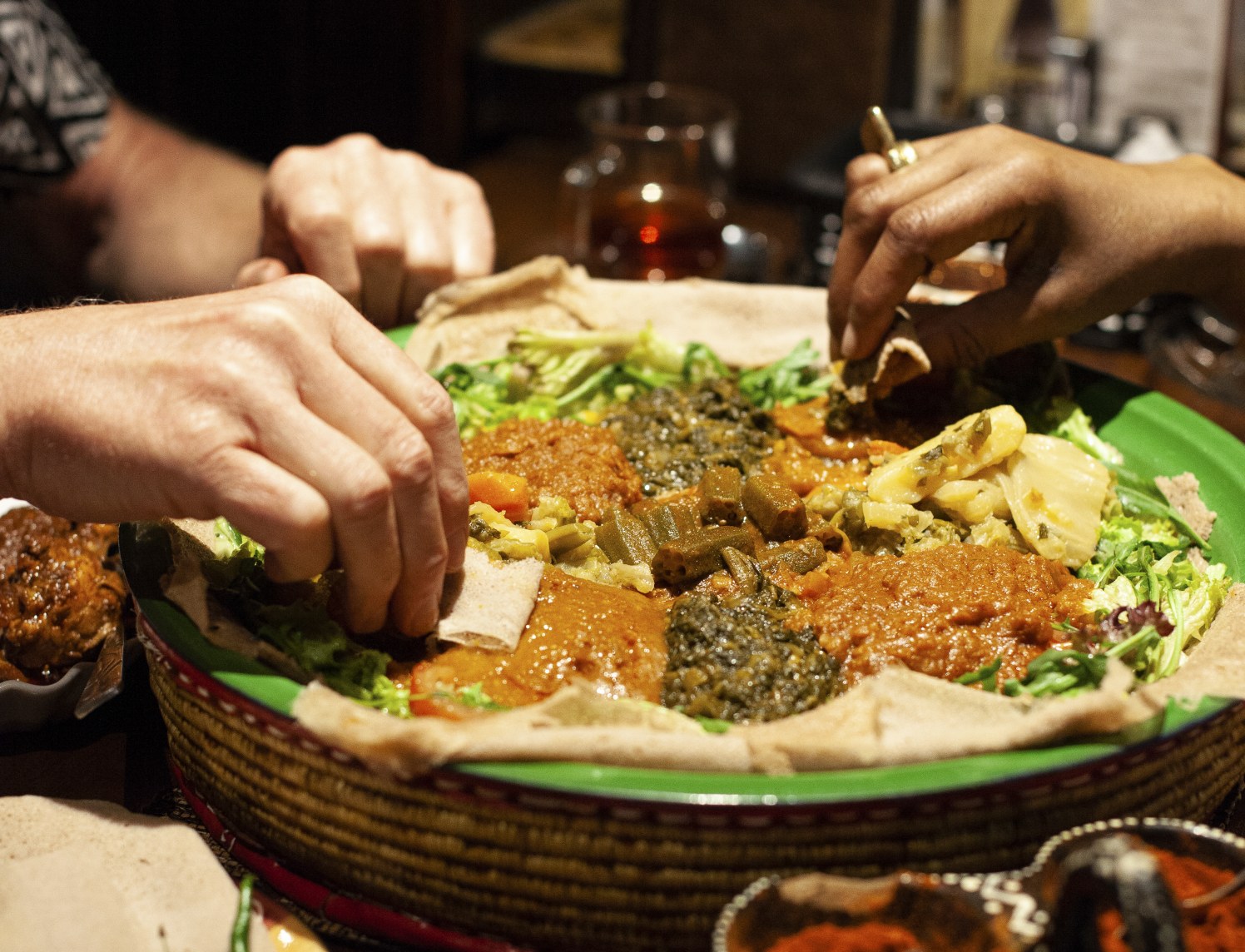 Michael says, ‘No matter how unfamiliar the guests are, each one is taught about how this special dining culture works.’ That reminds him a lot of Dasitu’s Ethiopian homeland, not only because of the smells and tastes, but because the food culture is very similar. In a comfortable space, guests sit on stools that are upholstered with thick cowhide and eat from a large platter, ideally with their hands. ‘It’s a wonderful way to eat together and communicate,’ says Dasitu, and it’s the perfect start to the evening, which Michael and Dasitu like to continue in a musical fashion.

A musical evening can be enjoyed, for instance, at the Brotfabrik, a cultural project situated outside of the city centre, in the district of Hausen. Curious first-time visitors may not find it so easy to locate the 1,500-square-metre venue. But the search will pay off! Eleven art and cultural projects share the space in the historical brick building, and concerts and readings by renowned performers are just as much a part of the schedule as performances by smaller groups and associations. 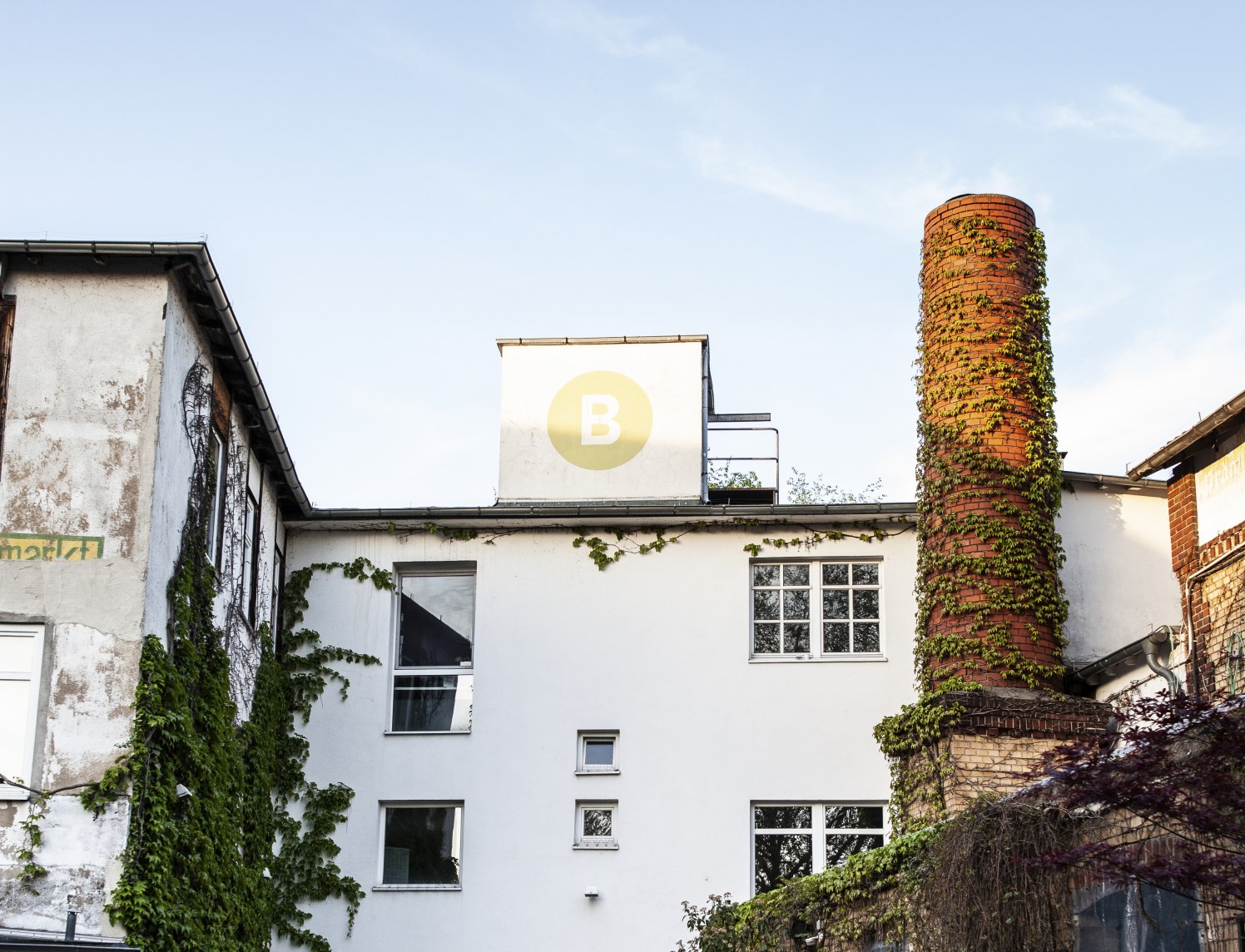 ‘No other place in Frankfurt offers a stage to so many different cultures,’ says Dasitu. So it’s only logical that every year the concerts of the Africa Alive film festival are held at the Brotfabrik. Cooperating and building something together — that’s what Michael and Dasitu love to do anyway.

‘There is a really strong tradition of jazz and world music here,’ says Michael, in reference to the record shop CDs am Goethe-Haus, which is located close to the birthplace of the great writer Goethe, at the heart of Frankfurt’s city centre. It’s one of the city’s final bastions, a place where there is still a selection of music that is generally classed as ‘world music.’ Michael and Dasitu recommend the cellar of the elegantly decorated shop, which features sturdy wooden shelves and olive-green walls. Here they have all sorts of jazz and a selection of African music — which Michael and Dasitu, however, best enjoy outside.

With a fantastic view of the Frankfurt skyline, the wide and open fields of Rebstockpark are the perfect place to enjoy music and the outdoors during summer. 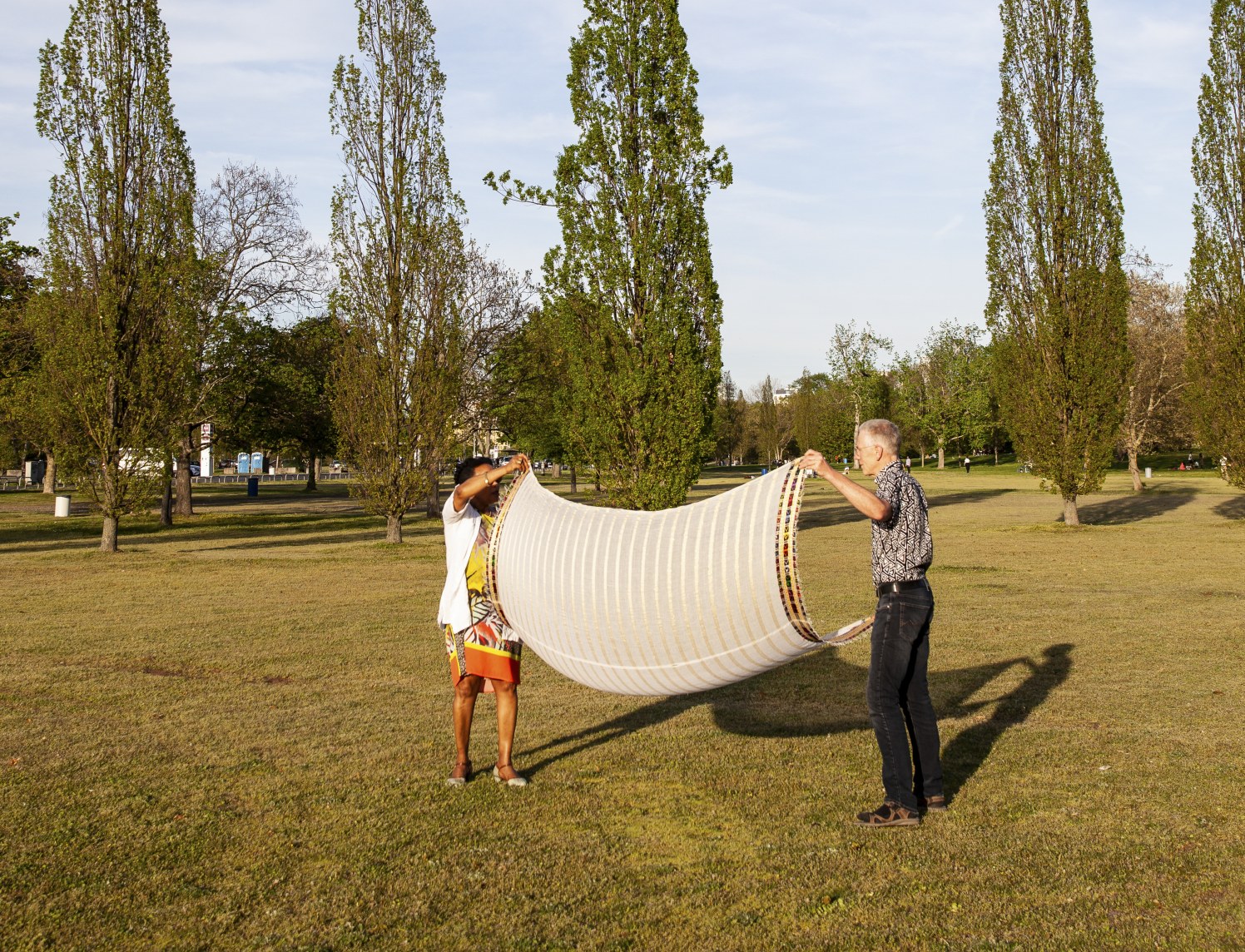 ‘The park made it to our list because it has become a hotspot for African culture due to two festivals in the summer,’ says Dasitu. Each year, the Afro Karibik Festival is held here in August, and the Afrikanische Kulturfest Frankfurt takes place here too — the event this June will already be its 14th iteration. During the festival, there will be music, dancing, and other performances, and handicrafts and food, of course.But Michael and Dasitu also like to come to the park when the stage and bazaar aren’t there. ‘We are simply drawn to the place that invokes so many memories of the lovely events in summer,’ says Dasitu.

It’s a similar story with Schaumainkai: even without any action going on, Michael and Dasitu like to sit on the banks of the Main and squint into the sun, watching the boats go sailing by. In doing so, they often think about their passion and livelihood: music. ‘During the Museumsuferfest, the Frankfurter Bühne [stage] was there for decades, close to the Eiserner Steg,’ explains Michael. ‘Different cultural groups from the Rhine-Main region were represented there.’ That in itself is rather remarkable because the rest of the festival has become an extremely commercial affair. ‘The park at the Weltkulturen Museum is an especially excellent place to escape all of the hustle and bustle,’ says Michael. ‘With nice workshops and guided tours, the museums in general still provide a great programme.’ 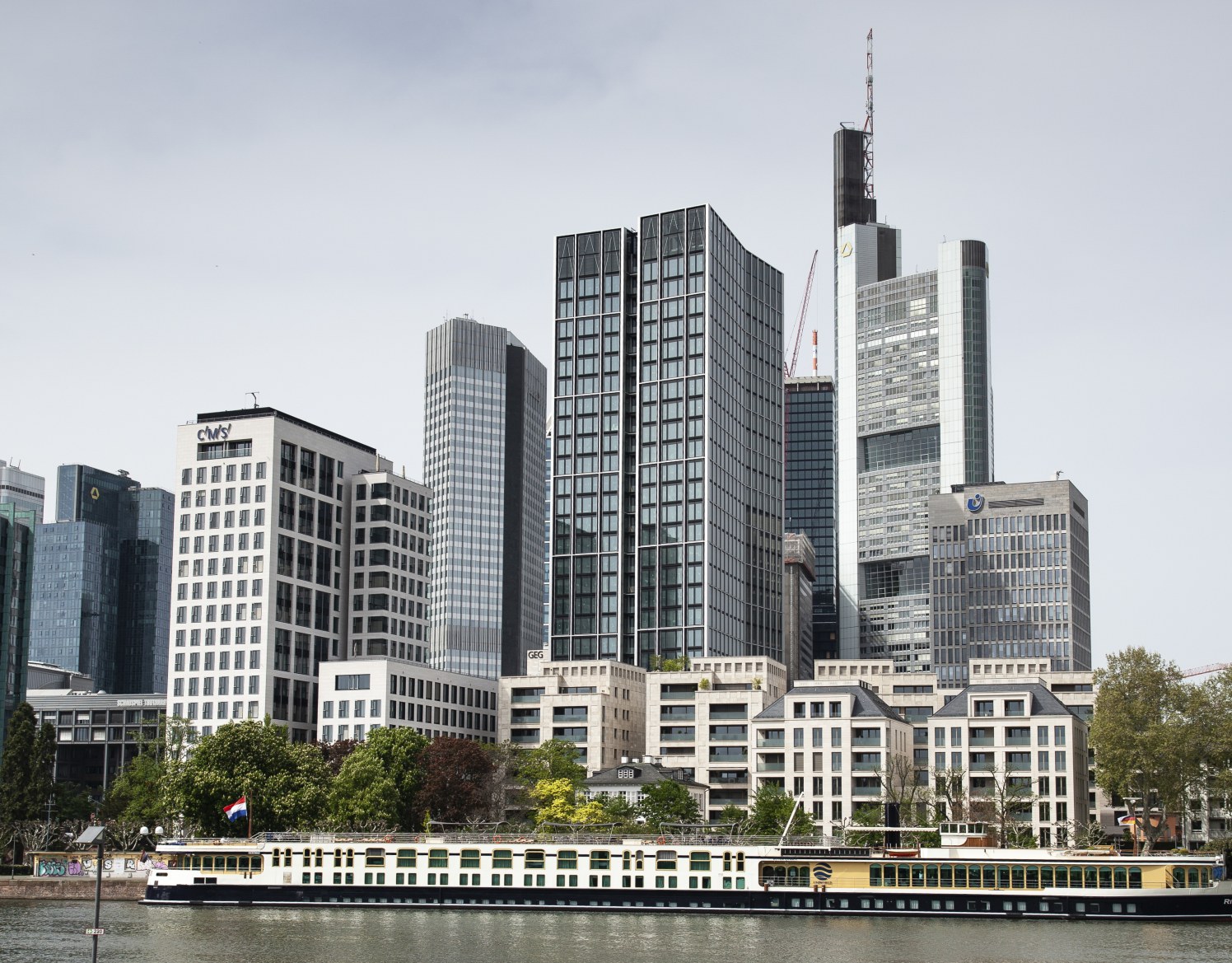 At the Weltkulturen Museum (Museum of World Cultures), which is also situated on Schaumainkai, Michael and Dasitu have already done a fair few things together, of course. In the 90s, they spent three years organising an event schedule for the museum’s park. Once again, it was not only the beautiful villa with its rustic wooden flooring that made it so special for Michael and Dasitu; rather, it was the people. ‘You can do research and take crafts courses for musical instruments there, as well as a lot of other things, all carried out by people who are passionate about their jobs. They also willingly offer up their extensive knowledge to those wandering aimlessly and marvelling at the stacks,’ says Michael, laughing. And there is actually a lot to marvel at here. In the heavy red leather armchairs in the in-house library, you can peruse through books about ethnology, art, and culture, and a diverse range of exhibitions are staged on the light-filled upper levels. As of October, they will also have the Weltbewegend exhibition, which documents how migration shapes different cultural disciplines, from art to artisanal crafts, and from language to lifestyle. And music, of course. 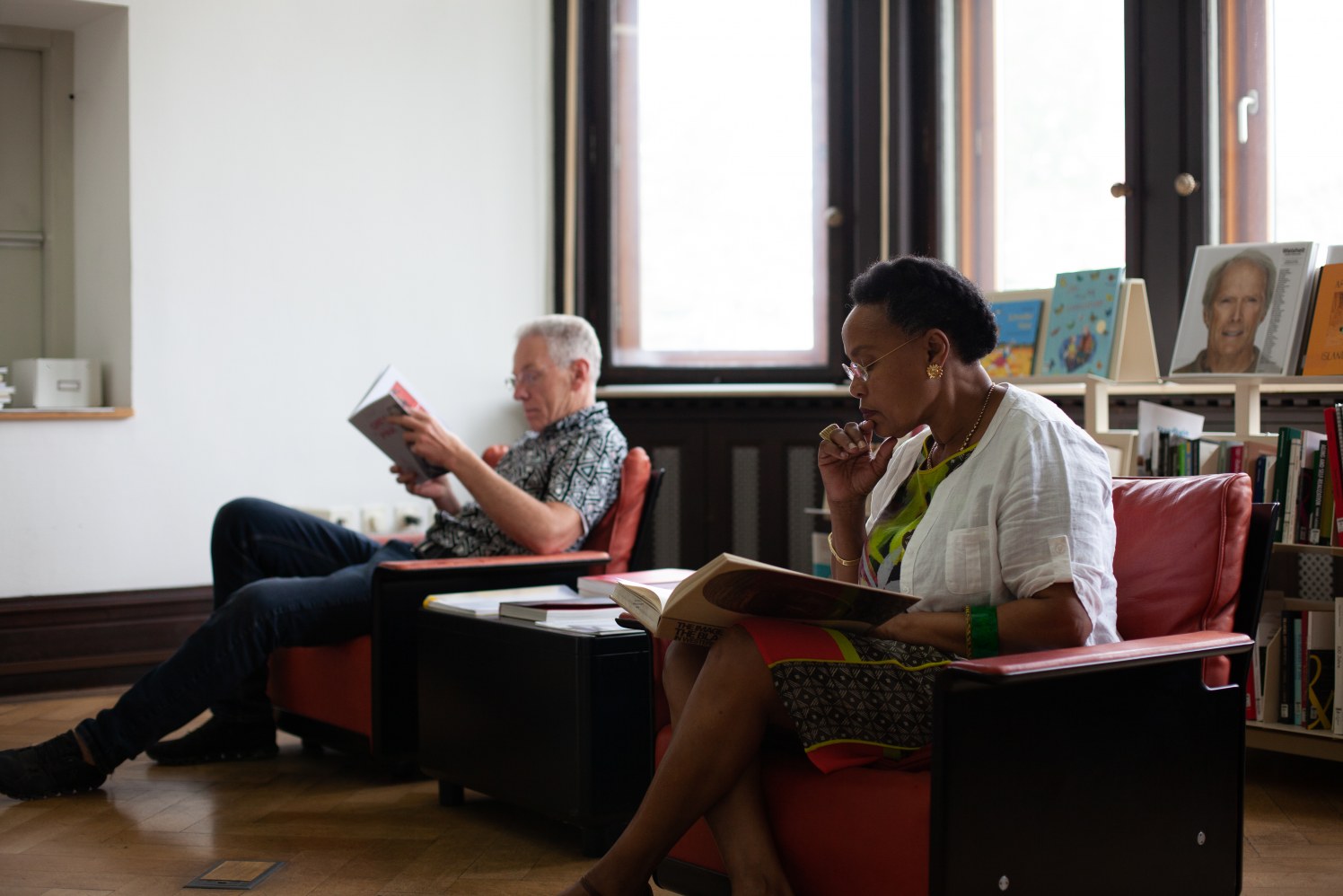