The Science of Scent

Subtle and seductive, the aroma molecule Iso E Super was created in a laboratory in 1973. In 2006, the master perfumer Geza Schön bottled it pure to create Molecule 01 - a fragrance that fast gained a cult following the world over.

Many more scents later, COMPANION visited Schön at his Berlin apartment and lab to get a whiff of the chemistry behind his 'anti-fragrances', and glean his take on the wellness industry's obsession with nature (hint: it's overrated).

COMPANION: Your first scent, Molecule 01, instantly became a success after its launch — although all you had to do was bottle its single ingredient, ISO E Super.
Geza Schön: I simply decided that this chemical was good enough to bottle on its own. Along with each of the four Molecule perfumes in the series, there is an Escentric fragrance which is an homage to the molecule. These fragrances contain more than one ingredient, and are my experiments to bring out the best of each molecule within a complex fragrance structure. So Molecule 01 has a velvety, slightly cedar woody, sexy amber-like note. It’s a complex scent, given that it’s made out of a single molecule.

To what do you attribute the Molecule series’ popularity?
Just one year ago, it was proven that the molecule ISO E Super stimulates one of our five pheromone receptors, which explains why people smell it on the street, run after you, and ask you what you’re wearing. I think that alone explains its success. I also think that these days, everyone’s longing for things that are simple and beautiful. The world is too complex and complicated already. Simple, striking solutions are the best. Molecule 01 embodies that.

Creating something so perfectly simple requires a wealth of expertise. By the time you were 13, you could identify over 100 distinct scents — blind! Was that down to talent or training?
The latter. I think that the way humans use their sense of smell is on a downwards spiral, as we’re so bombarded with images in our lives that we live almost purely visually these days. Of course we can hear and smell and taste and touch, but we watch and we look at things non-stop. This has overtaken our necessity to feel comfortable with using our sense of smell.

So the popular idea of ‘The Nose’ — a genius perfumer gifted with a highly acute sense of smell — is a delusion?
I think it comes down to the stage in your life at which you’re exposed to scent. Of course, if you’re growing up in Grasse in the South of France, which has a long history of fragrance, every tenth person probably works with smell, and knowledge is passed down through the generations. That creates a nearness, so you can get a sniff — quite literally — of how it all works from a young age. But I don’t know if I believe in the idea of a magical talent. Would Beethoven or Vivaldi have been great musicians had no one sat them down next to a piano or a violin? We all have a great capacity for creativity, and unless we’re given the opportunity to dive into an interesting and new topic, we won’t know if we’re good at something.

Where do you take inspiration from when creating new fragrances?
Any cultural phenomenon is a great starting point for a fragrance. It could be a country, a type of food, a texture, clothing, a book, a colour, a word, anything. It can also be a single product, like patchouli or sandalwood oil — a year ago, International Flavors & Fragrances (IFF), which provides me with ingredients, gave me the best ginger oil I’d ever smelled. I instantly thought, ‘I have to make a fragrance with that.’ 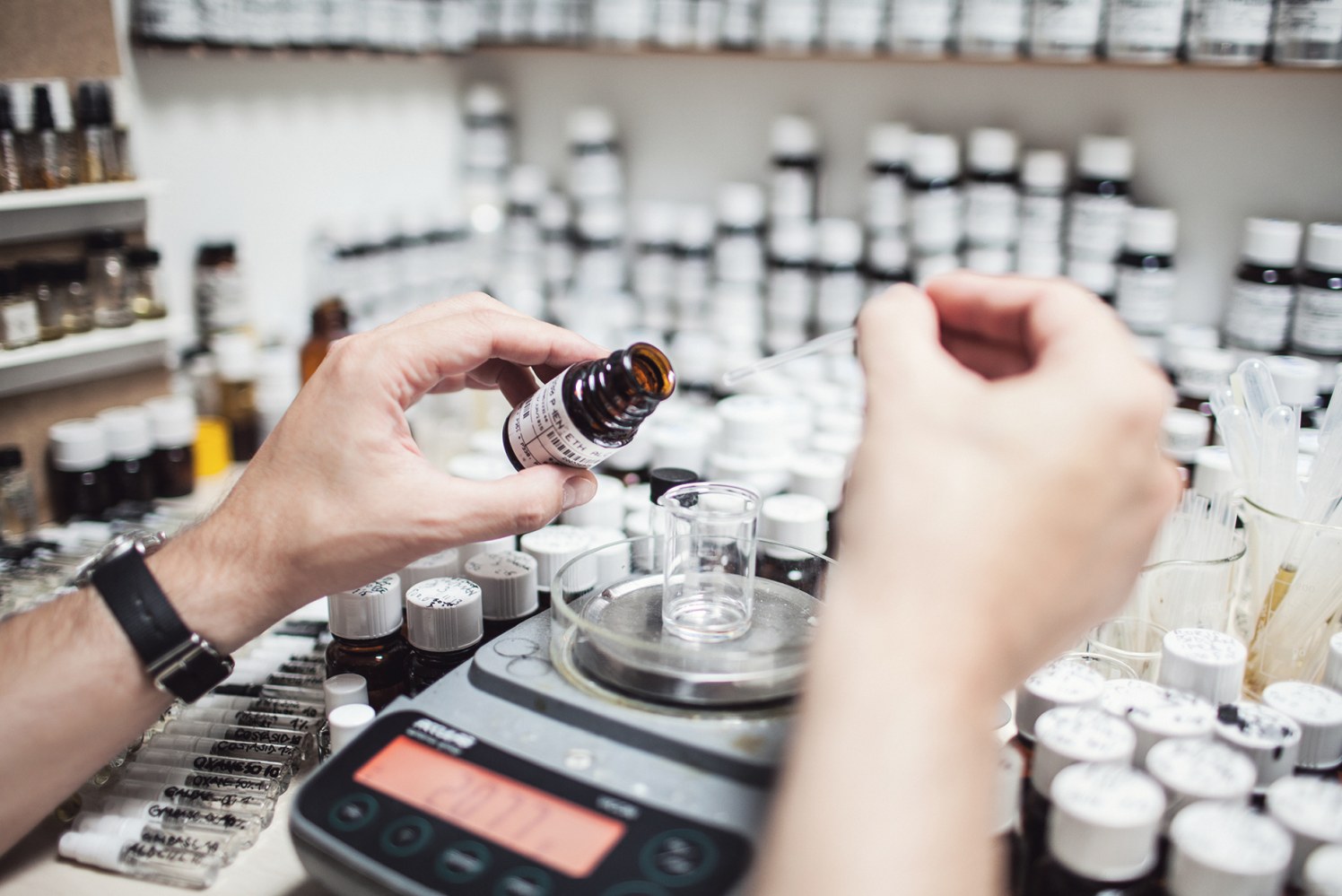 What about synthetics?
These days, a new chemical is rarer than a new natural because every chemical has already been filtered and frozen and smelt over and over again. You can see this reflected in the market. It’s only around every five to ten years that a new chemical appears to which you say, ‘Wow, that’s new, we haven’t had that effect yet, let’s work with that.’ Back in the 1970s and 80s, there was a much wider range of input.

You also create scents for companies.
The concept in this case comes from the client. Once I receive the briefing, I let it sit with me, then come up with ideas which fit the client’s image and unique selling point. Ultimately, of course, the goal is that people will experience the scent and think, ‘That’s a nice smell!’ That’s difficult for places like hotels, as there are people coming from all over the world with different ideas of what smells good.

Yet there are some smells which have almost universally positive connotations.
To create a scent for a particular space, say, for a hotel or an open space where people come to fulfil a particular purpose, you need to work with associations. The scent of an orange is a very positive smell. The juice is healthy, light, and sweet. So we like that. The same goes for suntan lotions. There are only two or three types worldwide which have developed over the decades. Because we use this lotion in summer, by the beach or the ocean — and nobody hates being on holiday — this is an instantly good smell. It surrounds you when you’re having a good time.

What does happiness smell like?
That depends on the moments in our lives at which we appreciate smell. There are some which make us go, ‘Ugh, that’s disgusting,’ and there are others which are lovely, like, say, your grandmother’s kitchen, where she’d bake cakes and you’d spend time together. If, for example, you have your first experience with a certain fruit or vegetable when the circumstances just aren’t right — say, your parents just had a big fight — it does form a connection between that smell and the particular situation you experience it in. So of course what happiness smells like to you depends on your socialisation.

That depends on the moments in our lives at which we appreciate smell. There are some which make us go, ‘Ugh, that’s disgusting,’ and there are others which are lovely, like, say, your grandmother’s kitchen, where she’d bake cakes and you’d spend time together. If, for example, you have your first experience with a certain fruit or vegetable when the circumstances just aren’t right — say, your parents just had a big fight — it does form a connection between that smell and the particular situation you experience it in. So of course what happiness smells like to you depends on your socialisation. 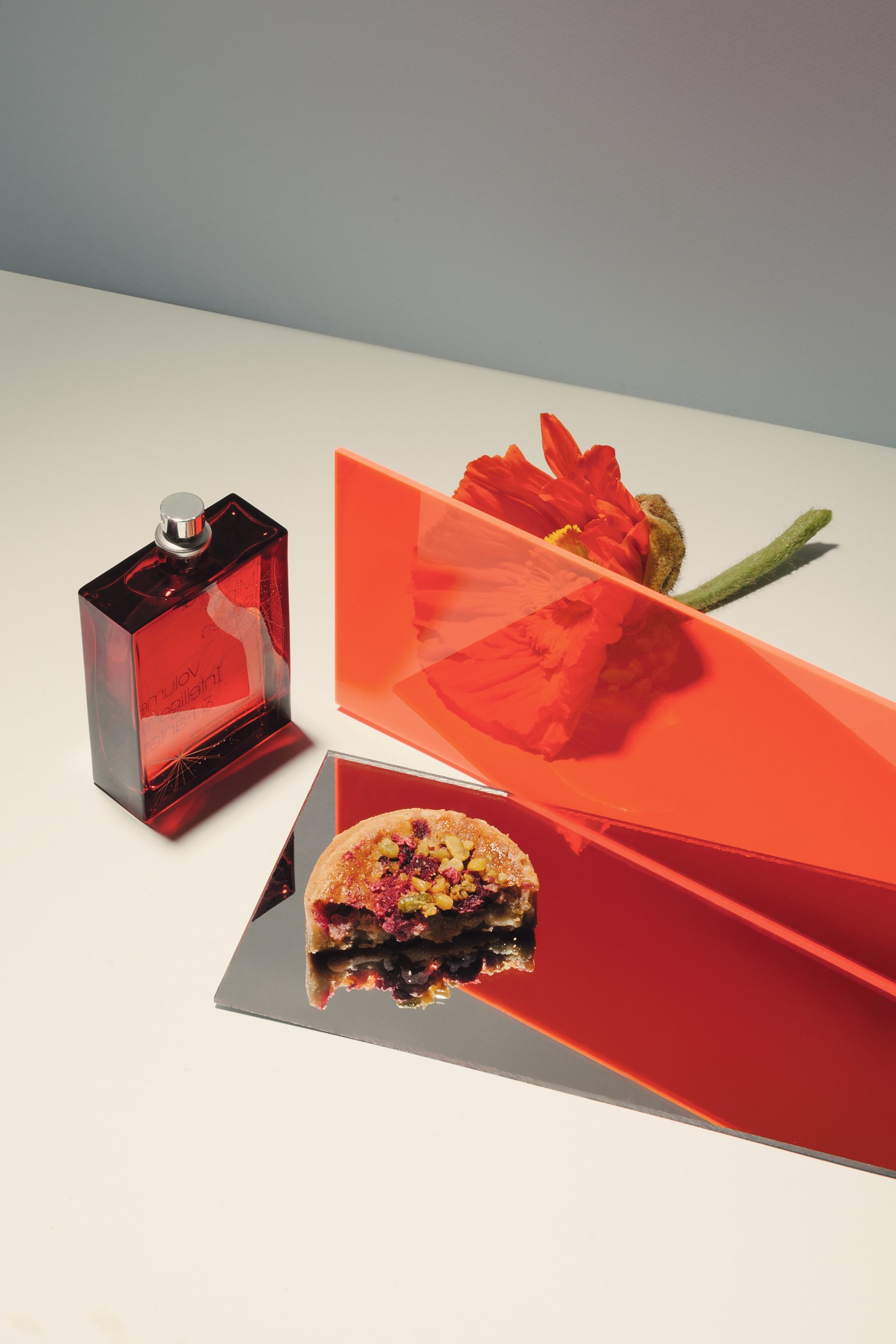 The well-being industry in particular is obsessed with all that’s natural, which your Molecule perfumes are not. Is the importance we place on the ‘pure’ and the ‘natural’ overrated?
I think it’s been taken to the extreme, where people still believe nature itself is good, and that therefore naturals like essential oils must also be good. Well, no. [laughs] Some essential oils are very aggressive. Nature produces essential oils either to attract or as a warning. It doesn’t do a herb any good if we pick a piece of basil and eat it. If a bug takes a bite of a basil leaf, they’ll only do it once. There’s stuff in essential oils which could, in certain doses, be poisonous. That’s why you can’t say nature is generally better. Most chemicals are actually much gentler to our skin. Yet the image we have created of nature has pushed many companies to only use naturals. They’re raw, and some people like that. But they don’t necessarily create a better smell.

What role does scent play in your own daily life?
I wouldn’t use any scented candles, for example, given that I work with perfume every day. We cook every evening and then the whole flat smells of food, which is how I grew up. I also like the scents of smoke and wood when the fire’s on. But when I’m working, I prefer neutral environments in terms of smell, and of sound — I rarely listen to music while I’m on my own. I like the quiet. So I tend to not influence my work by being exposed to too much. I try to keep myself away from the things that could bombard my life even more.

What are you working on at the moment?
There’s quite a variety of projects, and plenty to do. Yet sometimes I sit back and think, ‘What other fragrances does the world still want? Don’t we have enough already?’ It can be frustrating, as it’s difficult to create something new that has mass appeal. That goes not just for fragrances but for everything. These days, our entire intake of substantive knowledge is being digitised, but not being intensified. Intensity comes from times when you really look at things and spend time with them, when you go into and read or listen or experience things.

If anything, the Escentric Molecules are an elegant antidote to that feeling of overload.
That’s a big part of why we created them. Back in the 80s and 90s, I had a lot of friends who didn’t wear perfume — they said, ‘Oh, that’s too much, sweet, fruity, powerful, strong — I’d rather smell of nothing than of this.’ I felt it would still be nice if they had an identifiable, personal fragrance surrounding them which would identify these characters in a simple way. That’s what the Molecules are perfect for. [laughs]